One of the most persistent beliefs that have universally harassed mankind is that of heredity. The discovery of Christian Science by Mary Baker Eddy, however, less than a century ago, denounced this belief in its entirety as mortal illusion, as having no foundation in fact. Heredity is a product of the so-called carnal mind; hence it has no origin or place in the one Mind, which is God. The real man is spiritual, the reflection of Spirit, and no material belief can be found in the realm of infinite Spirit.

Fear and the belief in heredity go hand in hand. Many are held in bondage by the nagging fear that some misfortune is going to come to them because of some trait or weakness of one of their forebears, even though nothing untoward has yet come upon them. Perhaps a child is pampered and petted, kept indoors in inclement weather, watched over fearfully lest he become afflicted with weak lungs or some other ailment which has been in the family at some past time. When, however, the teachings of Christian Science are sought and demonstrated, one learns that man has but one Father-Mother, God. Thus the belief of heredity and the fear of it begin to melt like mist before the morning sun. 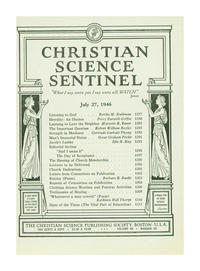