As It Was "in the beginning"

What a mistake it is to suppose that one's so-called best years can be lost or swallowed up by the passing of time, and that consequently existence can become purposeless or be blighted by impairment and decay! Such a belief is as untrue about man, the image and likeness of God, as it is of God Himself, with whom a thousand years are as one day. God does not change, nor does His creation, which He forever upholds and maintains. There is no disability or deterioration, no abating of strength and wisdom, no loss of health and harmony, in the spiritual universe, where. God's ideas dwell. Man, the reflection of God, exists eternally at the standpoint of primordial perfection.

The very first verse in the Bible declares (Gen. 1:1), "In the beginning God created the heaven and the earth," and subsequent verses set forth the creation of man and the universe as evolved by the divine Mind, God. This record of creation does not refer to an event which took place thousands of years ago, but presents the immutable truth that God, the only creator, maintains and preserves His creation in its original state of perfection and harmony. 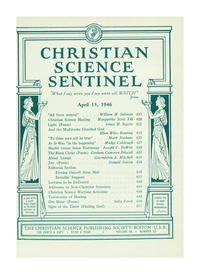