In the fourth chapter of the book of Zechariah we read that Zechariah was awakened by an angel, a divine illumination. In this spiritually awakened state of consciousness the prophet beheld a symbolic presentation of great importance to the whole world of religious thought.

Zechariah beheld "a candlestick all of gold, with a bowl upon the top of it, and his seven lamps thereon, and seven pipes to the seven lamps, which are upon the top thereof: and two olive trees by it, one upon the right side of the bowl, and the other upon the left side thereof." When he asked the meaning of this, the angel replied in so many words that it was a refutation of power in matter, or physical might, and a declaration of the supremacy of the power of Spirit. Later Zechariah asked, "What be these two olive branches which through the two golden pipes empty the golden oil out of themselves?" And the angel replied, "These are the two anointed ones, that stand by the Lord of the whole earth." 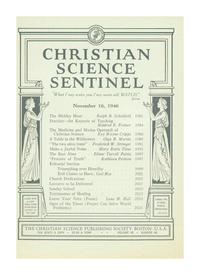