One morning in the early years of her study of Christian Science, the writer sat in the anteroom of a Christian Science practitioner's office. Important personal issues were at stake, and she had come for spiritual counsel as to how to arrive at a solution of the many difficulties which confronted her. As she sat quietly awaiting her turn to talk with the practitioner, she noticed on the wall a very beautiful picture of a placid body of water whereon the reflection of the landscape bordering the lake was almost as well defined as the landscape itself. Her attention was arrested.

The idea of reflection as taught in Science had been unfolding in her thought, and as she studied the picture she realized that the perfection of the reflection was in proportion to the stillness of the water. Then she knew where the solution of her problems lay—in her stillness, in her quiet knowing and reflecting of God. Had the waters of the picture depicted a storm, only broken fragments of the beautiful scene would have been reflected. Similarly, a storm of sense, of self-justification, self-will or self-righteousness, deprives one of the ability to reflect good. 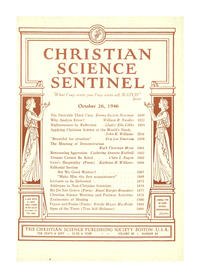