The Parable of the Rich Man and the Beggar

One of the Master's parables records that Lazarus, a beggar suffering from some malady, was laid at the gate of a certain rich man to beg for crumbs with which to sustain himself. The beggar is then represented as having passed on to the blessings of heaven, and the man of wealth to the torments of hell. The latter lifted "up his eyes" (Luke 16:23) to heaven and requested that relief for his sufferings be sent to him through Lazarus. But he was reminded that a great and impassable gulf existed between the two opposite states in which he and the beggar were abiding.

Christian Science teaches that heaven is not a place into which mortals may or may not enter when they have left the earthly scene, but that it is a spiritual, harmonious state of consciousness which may be enjoyed by all men here and now. It is attained individually in the proportion that the erroneous beliefs of mortal sense, commonly designated as hell, are destroyed in one's thinking. 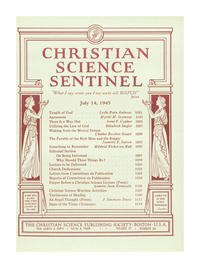