It is with a deep sense of gratitude to God for what Christian Science has done for me that f wish to tell of a healing, which occurred in 1923. Before I experienced this healing I had read "The Life of Mary Baker Eddy" by Sibyl Wilbur. While reading it, I was healed of a condition that had troubled me for a long time. Although I did not realize until about two weeks later that I had been healed, the reading of the book had made me receptive to the truth. When shortly afterward f became suddenly ill with laryngitis, I turned to Christian Science for help. It was my second attack that winter. I could barely speak while suffering from this difficulty but I did manage to call a practitioner. She asked me to call her back within half an hour. At the time I thought that would be impossible. To my unbounded joy, however, I was able to call her with a perfectly clear voice in less than half an hour. This healing was instantaneous and permanent.

At the time I called for help for laryngitis, all arrangements had been made for me to enter a private hospital to undergo a serious operation. Two eminent doctors had said the operation, which was to be performed on the following Tuesday, must not be delayed one hour. This was on a Saturday, and immediately after I had spoken to the practitioner, I called the doctor. Even before the healing came I felt impelled to call him. After a struggle on my part to make him understand who I was, he simply said: "It is too bad this had to happen now. You must let me know as soon as the tubes clear, because you cannot take ether in that condition." The operation never took place, for the instantaneous healing of laryngitis set me thinking. Before Monday morning came I realized that I had been healed of what the doctors had called cancer, as well as of the laryngitis, even though I had not mentioned to the practitioner that I had expected to undergo the operation.

Send a comment to the editors
NEXT IN THIS ISSUE
Testimony of Healing
It would be impossible to express... 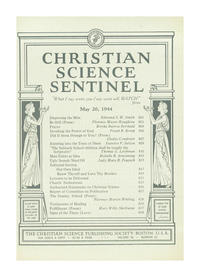