I attended the Christian Science...

I attended the Christian Science church for many years, and our children were enrolled in the Sunday school, but I was blind and deaf to its practical teachings until about two years ago. At this time our younger son became afflicted with a serious skin disease, covering his body from head to foot. As was our custom, we rushed him to a doctor. The condition was considered baffling and a test treatment was begun. This inflamed the condition and another method was tried, with still worse results. The situation finally became so alarming that the doctor gave up the case and advised us to take our child to a noted skin specialist for further tests.

By this time we were convinced that no one really knew what to do for our son, and that he would only be subjected to new and more painful experiments. In desperation we turned to Christian Science. We called in a practitioner. Our little son was delighted. I can still see the radiant look on his face after that first talk. I am sure he was cured at that moment. He insisted on getting up, although his body was bent over double when be walked. To us he seemed to be making a heroic effort. We did not realize that he was well. We still pitied him and yearned over his apparent bravery. Through the loving guidance of the practitioner we were made to realize our mistake. She gave us the verse from the twenty-seventh Psalm to read. "When my father and my mother forsake me, then the Lord will take me up." We knew we must loose him from the bonds of our belief. In less than a week all the scabs fell off and his clear skin did not have a single scar to show for this experience.

Send a comment to the editors
NEXT IN THIS ISSUE
Testimony of Healing
Over ten years ago I took up... 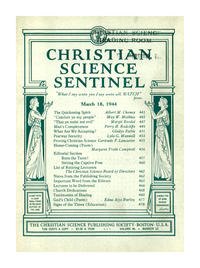