In the last chapter of Mark's Gospel are the words, "They shall speak with new tongues." These words fell from the lips of Christ Jesus after his resurrection, when he appeared to his disciples "as they sat at meat." After giving them the command to go and preach the gospel, he followed it with a clear and unmistakable description and prophecy of the signs that were to prove in the generations to come who were his true followers. Among these signs was the ability of those who believed on him to speak with new tongues, and to heal the sick. His prophecy has assuredly been fulfilled through the discovery of Christian Science by Mary Baker Eddy.

Both in the Bible and in our Leader's writings are many instances where, in the light of spiritual understanding, words take on new significance. For example, the word "touch" can be defined merely as one of the five material senses, but when used in connection with spiritual ideas, it is clothed with a meaning in which compassion and love play a major part. This compassion was vividly exemplified in the healing by Christ Jesus of the woman with an issue of blood, who approached him secretly from behind, thinking that if she could but touch his garment she would be healed. Through his spiritualized sense of compassion and love, Jesus instantly detected the mental appeal for help, and turning around he asked. "Who touched me?" This question astonished his disciples who were standing by him, and they said. "Master, the multitude throng thee and press thee, and sayest thou. Who touched me?"

Send a comment to the editors
NEXT IN THIS ISSUE
Article
Are We Judging Righteous Judgment? 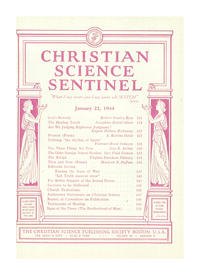