My attention has been called to a letter in which the writer denounces statements made in a lecture on Christian Science. The critic fails to grasp the teaching of Christian Science in regard to the unreality of evil, and his warning of hell-fire to those who are drawn to this religion sounds strange to modern ears. Christ Jesus taught that redemption must be achieved by works and not by words. He called on his followers to heal the sick and regenerate the sinner, and set an example by doing these works himself. Sickness and sin were healed when his teachings were obeyed and understood. Speaking of his mission, he said, "I am not come to destroy, but to fulfil," and commenting on this statement Mrs. Eddy writes on page 474 of "Science and Health with Key to the Scriptures," "Is it possible, then, to believe that the evils which Jesus lived to destroy are real or the offspring of the divine will?"

Send a comment to the editors
NEXT IN THIS ISSUE
Testimony of Healing
It is a great joy for me to express... 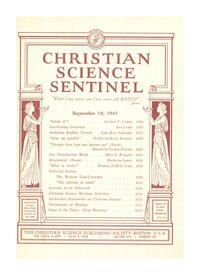