Near the middle of the last century a missionary went to the New Hebrides Islands in the South Pacific. He made his home on the Isle of Aniwa. There he discovered that at certain seasons the rainfall was very light, and oftentimes there was much suffering among the natives for lack of water to drink.

He determined to dig a well. The natives said that he was insane, that water did not come from the earth, but from the sky. They refused to give him any aid. Alone, he set to work. Down through the soil and hard gravel the well was dug. Finally, the bottom of the hole became moist. He summoned the native chiefs about him, dug a little farther, and was rewarded with a flow of clear, fresh water. Never again has anyone had to go athirst on the Isle of Aniwa. 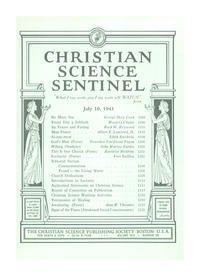