Keeping the Holiness of Life

The words from a well-loved hymn, "Keep the holiness of life," sang themselves into the consciousness of a student of Christian Science during a time of stress. In fact, the entire hymn, Number 273 in the Christian Science Hymnal, was a tremendous help in overcoming a sense of evil, discouragement, and futility. The student had become interested in Christian Science during the first World War, when the malevolence, fear, pain, and sorrow of the world weighed upon her until she felt the rescuing ministrations of the truth. Gradually she learned how to lift and banish this weight of ill from herself and her fellow man, because "the holiness of life," the reflection of that Life which is God, became apparent to her not merely as a beautiful theory, but as the living fact for everyday activity.

Until one gains some understanding of God, defined by Mary Baker Eddy in "Science and Health with Key to the Scriptures" (p. 465) as "incorporeal, divine, supreme, infinite Mind, Spirit, Soul, Principle, Life, Truth, Love," and of man as the image and likeness of God, with the consequent uncovering and destroying of the belief in evil as actual, one is apt to think that when all is smooth on the surface, there is no attempt of evil to accomplish its purpose. Then, when it belches forth with aggressive fury, it may be that dismay, fear, discouragement, and finally cynicism try to take possession of one's consciousness. 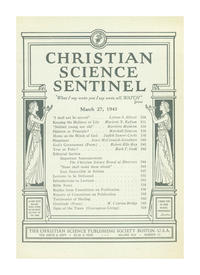