The wee one was only three, but so attached to her daddy that when war took him from home she drooped like a flower without water. Food and toys were ignored. One quest only she pursued from morning till night, climbing up and down stairs with the plaintive cry, "Where's daddy?" She did not linger for the answer—the name of a place gave no comfort.

That cry, ringing in the mother's ears, roused her to see that the child was fading away under a wave of human sympathy that settled down on the household like a mist. It was based on the belief of separation, which would serve to put the absentee, in their thought, outside the kingdom of heaven, just as as it was separating the child from the harmony of her home. "Something must be done at once," reasoned the mother, "and Truth is the sure remedy. I have been feeding the child chaff in giving her the name of a mere place! No wonder she is starved; nothing satisfies but the truth! Did not Jesus say, 'The truth shall make you free'?" 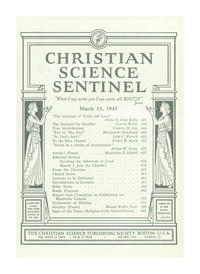