"In all thy ways"

It was the second night of the senior play. The members of the graduating class of the high school were jubilant because there had been a complete sell-out of the tickets, and everyone had worked diligently to make the play a success. Each member of the cast was letter-perfect. The first night's performance had gone off smoothly, and there had been many favorable comments on the play.

The curtain had just fallen after the second act when one of the principal characters lost consciousness, and seemed to be in a very serious condition. Consternation prevailed among the members of the cast, but Dick and Joan, who attended a Christian Science Sunday School, knew at once that here was a situation which required instant attention. While the others were rushing about trying to do something materially for the young man, Dick and Joan each went to an unoccupied classroom to "know the truth" as they had been taught in Sunday school. 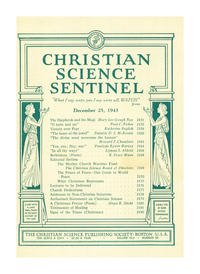