Christian Science came to me about three years ago, when I was very worried and upset. It was presented to me by a friend who worked in the same office, and I was ready for it. Although I had traveled extensively, I had never seen any of the Christian Science literature, had never heard of the textbook, "Science and Health with Key to the Scriptures" by Mary Baker Eddy, nor had I ever known anyone who was a student of this religion. I did not even know that the friend with whom I worked was a student of Science.

When Science was presented to me, my sister was recuperating from a major operation, and to mortal sense she was very low. At the same time my grandmother, who lived in our home, was suffering from a heart attack, was confined to her bed, and was not expected to live from one day to the next. The whole family was under a great physical and financial strain.

Send a comment to the editors
NEXT IN THIS ISSUE
Testimony of Healing
In the Christian Science textbook... 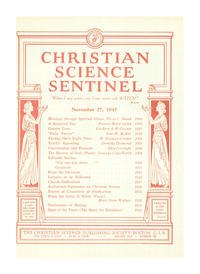