When Brian was nine years old, he was sent to a boarding school, but every week end he came home to his parents. Brian had been brought up in the knowledge of Christian Science, and had been taught to use it not only when he was sick, but also to aid him in his lessons, and in every problem as it appeared.

One week end when he came home from school, he told his mother that he was at the head of his class in every subject except mathematics, but that it seemed impossible for him to conquer his lack of mathematical ability, and that especially in oral mathematics he was doing badly. 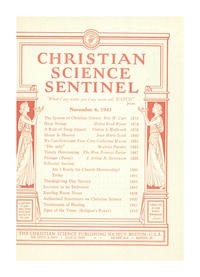