My gratitude to Mrs. Eddy for...

I became interested in Science in 1919. Since that time many blessings have come to me. One was the healing of mastoiditis. It was necessary for me to have an examination by a physician, because of the rules at the place where I was employed. He called in a specialist, who advised an immediate operation. My request was that this be delayed for a few days; whereupon I was told that unless the operation were performed at once my life would not last thirty days, as there was streptococcic infection. After talking to the practitioner who was helping me, I decided to continue Christian Science treatment without medical or surgical aid. Three months passed, during which time I did not work, but I was wonderfully sustained and cheered by the help of the practitioner and my study of the Bible and the Christian Science textbook, "Science and Health with Key to the Scriptures" by Mary Baker Eddy. About this time I went to another city for a visit with a friend who is a consecrated practitioner. She took up the work for me.

Send a comment to the editors
NEXT IN THIS ISSUE
Testimony of Healing
I am deeply grateful for all the... 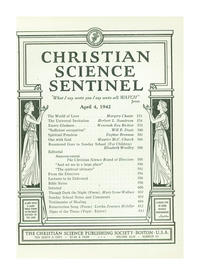