We are all familiar with the old adage, "Like father, like son." This saying has been used when voicing a theory which condemns man to all the ills that follow in the train of a belief in heredity; but in the light of Christian Science it holds forth the full promise of man's true heritage as the son of God.

Let us examine these two aspects of this saying. The material concept of it implies that the son may have no possible chance of avoiding the evil ways and tendencies of his human parent. The young child is often excused for conduct which appears to those near him "just like his father." In many subtle ways the chains of future enslavement are forged by this seeking of resemblances between human parent and offspring, and the false belief of man as a creator becomes more and more entrenched. 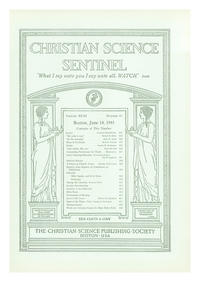