I wish to express my gratitude for a healing which I...

I wish to express my gratitude for a healing which I experienced through Christian Science. I had been quite ill for several days, and early one morning, when rather disturbing symptoms were manifested, I asked a member of my family to call a practitioner. She returned to my room to tell me that the practitioner asked that I count my blessings for one hour. I was feeling quite uncomfortable, and my first reaction was a feeling of resentment at being asked to spend one hour doing something which I was sure would not take longer than ten minutes. However, knowing that I must be obedient, I looked at my watch and closed my eyes, and began to count my blessings.

1 began by recalling all that I could remember of the truths which had become a part of my thinking because I had learned something of Christian Science. When I had enumerated as many as possible, I tried to think of every good and beautiful thing which had come into my human experience, going back into the farthest recesses of my memory. Many things came to my thought which I had forgotten long ago, and I began to be aware of blessings which I had taken for granted or had never noticed. I began to realize the great benefits which have come to me because I had had the privilege of attending the Christian Science Sunday School, and of membership in The Mother Church and in a branch church. I awoke to a sense of gratitude for the harmonious home life which I have always enjoyed, and for the sacrifices made by my parents to give me advantages of education and wholesome amusements. I became very much absorbed in this line of thought, and when I finally opened my eyes and looked at my watch, I found that I had been counting my blessings for an hour and twenty minutes.

Send a comment to the editors
NEXT IN THIS ISSUE
Testimony of Healing
Christian Science was introduced to me some years ago,... 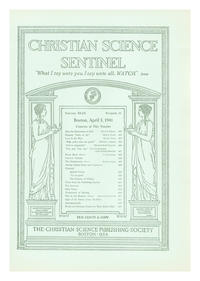