In a recent issue of your newspaper there appeared an...

Austin E. Page, Committee on Publication for the State of New Hampshire,—Exeter

In a recent issue of your newspaper there appeared an intersting and thought-provoking article entitled "It Could Be Done." The writer points out that there are "almost unlimited forces for good, that are not being used," and he makes a strong plea for real leadership in organizing and utilizing these forces to bring about a better way of life.

He makes a friendly reference to Christian Scientists as setting a good example by minimizing evil in their conversation, and he commends the attitude which causes them to refrain from continually talking about poor health. At the same time, he thinks it possible that they go "too far" in denying the reality of evil.

Send a comment to the editors
NEXT IN THIS ISSUE
Article
In a recent issue a Christian Science practitioner is... 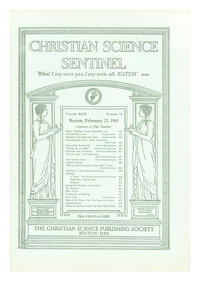