Healing through Obedience to Law

On page 87 of "Retrospection and Introspection" by Mary Baker Eddy, is found this significant statement and admonition: "Genuine Christian Scientists are, or should be, the most systematic and law-abiding people on earth, because their religion demands implicit adherence to fixed rules, in the orderly demonstration thereof." Christian Scientists are learning that obedience to divine law liberates, and establishes their lives on a firm foundation. They are learning that through understanding and obedience to the law of righteousness are security, health, and happiness demonstrated.

The sincere Christian Scientist is obedient to civil law; and, more important still, he strives to obey the basic law, the moral law, which was revealed to mankind through Moses and is set forth in the Ten Commandments. These Commandments may be committed to memory, but a true understanding of them comes only through assiduously applying them in human affairs as their meaning unfolds in consciousness. Indeed, how can we obey a law we do not understand? 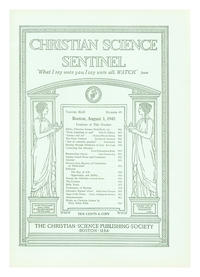