Christian Science was presented to me when I was in the...

Christian Science was presented to me when I was in the depths of despair. My husband had been injured in an accident and was unable to work, and we had been obliged to give up our home and farm. I was struggling to keep our three children in school, and the worry and fear over all this brought on a nervous breakdown. I suffered severe spells with my heart, and the doctors also found an internal disease for which they said an operation was necessary. About this time a relative who lived in a distant city came to visit us, and left a copy of the Christian Science textbook, "Science and Health with Key to the Scriptures" by Mary Baker Eddy. At first I read the book only at intervals, but it was not long before I began to glimpse the light, and to realize that this was the truth that makes free. One night it seemed that my suffering was more than I could bear, and that there was no rest for me. So I got up, went into another room, and read the textbook, and it was while reading the words on page 203, "If God were understood instead of being merely believed, this understanding would establish health," that the light shone round about me, and I was lifted on wings of Love. I had gained a new and heavenly vision, and Christian Science became my daily study.

We have experienced many physical healings, as well as many other blessings in our family, some as the result of my own efforts, and others with the help of a loving practitioner. It was not long before my husband was able to go to work, and we were soon gaining ground from a financial standpoint.

Send a comment to the editors
NEXT IN THIS ISSUE
Testimony of Healing
With a heart filled with gratitude and love for our revered... 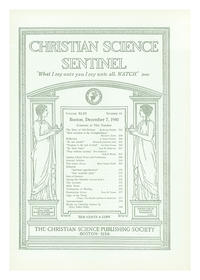