The statement in Mrs. Eddy's spiritual interpretation of the Lord's Prayer (Science and Health with Key to the Scriptures, p. 17), "Love is reflected in love," proved to be most effective in the experience of a student of Christian Science who was seeking employment. This student was sitting one day in an office, with many other young women who were seeking the same position. It had been clearly stated by the person in charge of the interviews, that only one individual was to be employed.

While awaiting her turn, the student of Science became interested in a young woman sitting next to her, who told the Christian Scientist how much she was in need of the position. The Christian Scientist was also in need of the position, but her knowledge of the truth concerning God and man's spiritual relationship to Him enabled her to share some helpful thoughts with her neighbor.

Send a comment to the editors
NEXT IN THIS ISSUE
Article
In a recent issue, a correspondent refers to a Lesson-Sermon... 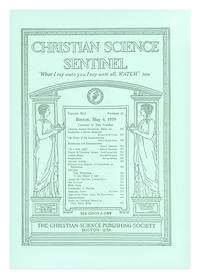