MANY honest, intelligent people, looking out upon the great economic and social revolution through which the world now seems to be passing, feel almost overcome with a sense of their own helplessness, believing that all they can do is to drift along with the tide. Their hearts are filled with a deep longing to help in some way to bring about peace and order; but they believe that there is nothing they can possibly do about it. This is the plight of those unacquainted with Christian Science. The Christian Scientist always has some means of helping. There is never a time when he cannot offer some light towards the correcting of the apparent error, and there is no situation or condition so dark as to remain wholly unaffected by the light he brings.

First of all, however, instead of being appalled or disheartened by the error that is being brought to the surface, the Christian Scientist looks beyond the seething mass of impurities and sees clarified, purified conditions coming to light. He recognizes the present period as an unusually active one in its great transition from the material to the spiritual standpoint. He sees that the world is clearly experiencing what Mrs. Eddy has described on page 96 of "Science and Health with Key to the Scriptures," where she says: "This material world is even now becoming the arena for conflicting forces. On one side there will be discord and dismay; on the other side there will be Science and peace. The breaking up of material beliefs may seem to be famine and pestilence, want and woe, sin, sickness, and death, which assume new phases until their nothingness appears." 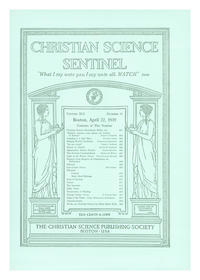