That "man's extremity is God's opportunity" was proved...

That "man's extremity is God's opportunity" was proved to me in 1933, when no other way seemed open to me than that of ending my days in an old people's home; yet the poor-law administration was still deferring my admission. It was then that I met on the street a woman whom I have never seen since. She spoke to me of Christian Science and of all the benefits she had received through it. She gave me half of The Herald of Christian Science which she was carrying and recommended that I read those pages. But being worn out, sick, nearly blind, and in want, I was no longer interested in anything and put aside the pages. Little by little, however, I found myself drawn to them. I then gathered them up and began to read them, one by one, with great difficulty. A great desire then came over me to go and see this Christian Science church about which the woman had spoken. One Wednesday evening, therefore, I went there, accompanied by a friend, for it was a long way to go and I was hardly able to see anything. I found the service very beautiful, and felt the need to know more about this religion. After the service I approached the distribution table and received a Herald with some words encouraging me to make the necessary effort to read it when I got home.

When I had finished reading all the testimonies, I exclaimed. "Why, if all these people have been healed, I too can be!" I thought of the enteritis from which I had suffered for ten years without having been able to obtain from medical science the least hope of healing, and which, according to the many doctors who had attended me, was the cause of all the complaints from which I was suffering. Upon that I fell asleep, and the following morning I woke up entirely healed of the chronic enteritis.

Send a comment to the editors
NEXT IN THIS ISSUE
Testimony of Healing
In the hope that it may be of help to others, I should like... 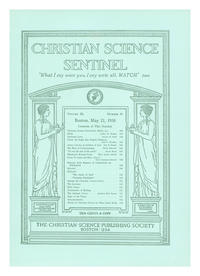