The Revelator of Christian Science

The writings of Mary Baker Eddy make it clear that progressive understanding and demonstration of Christian Science cannot be attained without a right recognition of the Discoverer and Founder of Christian Science and of her relation to the Cause which she established.

It was not the purpose of Mrs. Eddy to exalt herself in the opinion of the world. That she had no desire for adulation, and was not interested in the world's opinion of her personality, was evidenced in word and deed throughout her activities. Her one desire was to teach all mankind to follow the Christ in the demonstration of Truth. Indeed, she taught that "intensely contemplating personality impedes spiritual growth" (Miscellaneous Writings, p. 308). She knew that looking to person for healing brings neither healing nor benefit, but rather hinders the work, which demands radical reliance upon God. And on the same page she wrote: "Whosoever looks to me personally for his health or holiness, mistakes. He that by reason of human love or hatred or any other cause clings to my material personality, greatly errs, stops his own progress, and loses the path to health, happiness, and heaven. The Scriptures and Christian Science reveal 'the way,' and personal revelators will take their proper place in history, but will not be deified." It was, then, the perpetuation of the truths of Christian Science and the "proper place" of the revelator, rather than her personality, with which Mrs. Eddy was concerned. 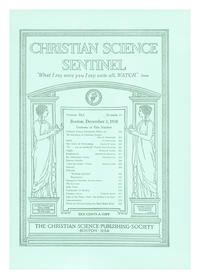