Words can never express my gratitude for all that Christian Science...

Words can never express my gratitude for all that Christian Science has done for me. I have had many wonderful proofs of the healing power of the Christ, Truth. I have been healed on two different occasions of what medical science calls acute blood poisoning, also of pleurisy; and broken bones have been healed without the aid of a physician. During the last experience I worked every day and used the arm continually, although at times the pain seemed very severe; but as I held to the thought that God is my Life and my strength, I could continue working. I am very grateful for the many proofs of healing that I have had, but I am most grateful for the new birth I have received through the study and application of this glorious truth. I can look back and note many changes that have come to my thinking and actions.

Several years ago it seemed that each time a certain individual spoke, regardless of what the subject might be or whether or not I was concerned, I would find myself criticizing him. This kept on for some time until I had built a wall between this person and myself, and rather than meet him face to face I would avoid him by going out of my way. Naturally, when my thinking was so warped, its effects were soon seen in my business. It dwindled to practically nothing, and not until then did I begin doing some serious thinking. I saw that this wall I had built up was error, and I recognized that I was unable to attend to my business competently because I was being influenced by a sense of condemnation. Mrs. Eddy tells us plainly in Science and Health (p. 296), "Either here or hereafter, suffering or Science must destroy all illusions regarding life and mind, and regenerate material sense and self." I soon found out that it took more work to tear down this wall than it had taken to build it up. But I went to work to the best of my understanding and got to the point where i was able to go to this person, whom I had been misjudging, and tell him all the things I had thought about him and ask him if he would accept my apology. I told him it had been a cowardly act on my part because I would not express these erroneous thoughts audibly, but kept them to myself. He very graciously accepted my apology, and said he had never thought or felt that there had been any coldness on my part. I am happy to say that this man is a good friend of mine today. From that time my business improved, for now instead of being led by hate I was letting Love guide me, and in a short time I was doing double the amount of work I had done at any previous time.

Send a comment to the editors
NEXT IN THIS ISSUE
Testimony of Healing
When I was a young child, my mother was led to Christian Science... 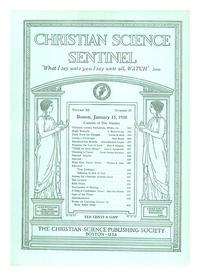