"They that observe lying vanities forsake their own mercy" (Jonah 2:8)—There is some uncertainty as to the correct form of the Hebrew word "chasdam," rendered "their own mercy." Thus Kittel (Biblia Hebraica) contends that originally the text included a word similar in appearance to "chasdam" but meaning "refuge or shelter" (cf. Feyerabend: Hebrew Dictionary: p. 147). Moffatt apparently accepts this emendation, for he translates: "Those who heed vain idols leave their real refuge;" though Smith prefers: "Those who heed false vanities forsake their piety."

"Their eyes stand out with fatness" (Ps. 73:7)—The Septuagint, Syriac, and Vulgate versions suggest that instead of the word translated "eyes," we read a term which in the Hebrew is practically indistinguishable from it but has the meaning of "iniquity" (Kittel: op. cit.; and Briggs: Psalms, Vol. II, p. 143), while it may be added that the verb rendered "stand out" has the primary meaning of "go out." Briggs (op. cit., p. 141) suggests: "Their iniquity doth come forth from fatness," adding the comment that "their fat gross mind and body breed iniquity."

Send a comment to the editors
NEXT IN THIS ISSUE
Testimony of Healing
I have had many healings since my entry into Christian Science... 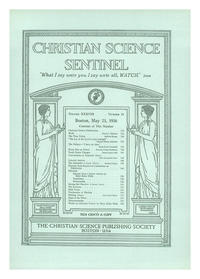