"Him that hath called us to glory and virtue" (II Pet. 1:3)—The leading manuscript authorities favor a slightly different reading, which may be literally translated: "Him that hath called us by (or 'to') His own glory and virtue." When the Greek word "arete" (virtue) is referred to persons, it denotes any excellence of body or mind, especially "virtue or goodness," while Thayer points out that when used of God "it denotes his power" (Greek Lexicon, p. 73). Weymouth has: "Him who called us by His own glory and perfection;" and Moffatt: "called us to his own glory and excellence."

Send a comment to the editors
NEXT IN THIS ISSUE
Testimony of Healing
With a deeply grateful heart I should like to relate a... 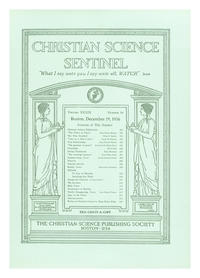