Unlike the majority, I was not in need of physical healing...

Unlike the majority, I was not in need of physical healing when I began the study of Christian Science, but when I realized that the beautiful works which Christ Jesus performed when he was going through his earthly experiences are possible now—in fact, that he had never revoked his command that his followers should heal both the sick and the sinning—I was so filled with joy that I turned wholly to the study of Christian Science. In the succeeding years I have never had the slightest desire to follow any other religious teaching, for I was convinced from the first that this Science is the only pure Christianity.

While I was in good physical health at the time, I was wearing glasses, and had no thought that I should ever be able to see without them. I had to have two pairs—one one for constant wear, and one for close work. Within the first few weeks of my studying I broke one pair accidentally, and then found that I needed neither pair when studying the Bible, Mrs. Eddy's works, or our periodicals. This showed me that I could be healed so that I would not need them at all, and this was proved soon afterward.

Send a comment to the editors
NEXT IN THIS ISSUE
Testimony of Healing
I am unable to express in words my gratitude for a healing... 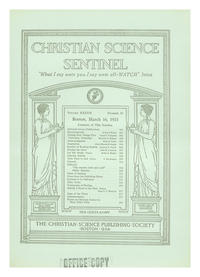