I am grateful for the great need that humbled me sufficiently...

I am grateful for the great need that humbled me sufficiently to cause me to seek help in Christian Science. I had been told by one of the most eminent specialists that my eyes had been neglected until they were beyond help and that I should eventually become blind. The trouble was diagnosed as spasms of the nerves of the eyes, also compound astigmatism.

For the better part of two years. I had been unable to read more than a line or two at a time. During the first year of my study in Christian Science I was unable to read much except the Bible and Christian Science literature. In searching for instruction pertaining to the healing of blindness, I found this sentence in Science and Health by Mrs. Eddy (p. 448): "Blindness and self-righteousness cling fast to iniquity." I did not turn down the sentence as not applicable to my case. I pondered it much until I saw that blindness was classified with self-righteousness, and to be healed of blindness, one must overcome self-righteousness by seeing the righteousness of God. I went back to study more carefully the entire sentence, "Blindness and self-righteousness cling fast to iniquity." How was a self-righteous thought to see the iniquities to which it was clinging fast? From the meaning of those words it seemed a hopeless task, for a self-righteous thought is sure it is right and is holding fast to what it believes is right or it would not be self-righteousness. It unconsciously thinks that what it cannot see is not to be seen. By further study I finally read in Romans, "Therefore thou art inexcusable, O man, whosoever thou art that judgest: for wherein thou judgest another, thou condemnest thyself; for thou that judgest doest the same things." I was of a critical nature, and this verse opened my eyes to see that by honest application of it to self-correction I need no longer delay my healing by clinging fast to iniquity. My eyes began to improve immediately and in about four years I laid off glasses, and my sight was better than ever before. I had never had a specific treatment for my eyes, nor had I given myself one.

Send a comment to the editors
NEXT IN THIS ISSUE
Testimony of Healing
When a young woman I witnessed the healing of a loved... 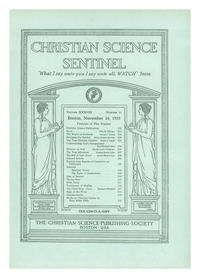