For some of the many blessings I have received through...

For some of the many blessings I have received through the study of Christian Science, I wish to take this opportunity to express my gratitude.

As a young child I suffered from spinal trouble and tuberculosis, as a result of double empyema, for which both lungs had been operated upon. The doctors gave me only until about the age of twelve to live. As the time limit they had set for me drew near, Christian Science was presented to my mother. Through the study and application of this truth, both conditions were completely healed within a year. These healings were so complete that I was able thereafter to participate actively in strenuous athletic competition, including cross-country running and football. During the seven years of this athletic activity, dislocations, pulled tendons, strained ligaments, and minor difficulties which presented themselves were all overcome within twenty-four hours. There were also many compulsory physical examinations, all of which were passed successfully.

Send a comment to the editors
NEXT IN THIS ISSUE
Testimony of Healing
As I look back over the years during which Christian Science... 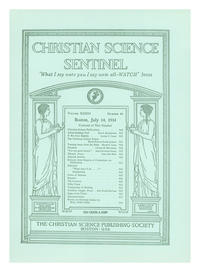