Healing in Christian Science is vastly more inclusive than the physical relief from pain or the alleviation of mental distress. True healing may rightly begin with the supply of these needs. One cannot, however, stand still at that point of attainment, for the overcoming of the sense of pain or other discord is but the beginning of one's mental ascent from error to Truth, from matter to Spirit, from sense to Soul. Human thought naturally advances step by step from simple faith towards higher realms of spiritual understanding. And as such understanding pervades and illumines human consciousness there is the inevitable change from false and material ambitions and aims to those spiritual desires and aspirations which reach out for and inevitably achieve the divinely ideal. This process of unfolding spiritual understanding is clearly stated by Mrs. Eddy in "The First Church of Christ, Scientist, and Miscellany" in the words (p. 188), "When it is learned that spiritual sense and not the material senses convey all impressions to man, man will naturally seek the Science of his spiritual nature, and finding it, be God-endowed for discipleship."

In the ninth and tenth chapters of I Samuel there is a story that portrays most interestingly the transformation that takes place in human thought through the application of the truth. It is recorded that Saul, the son of Kish, went forth in search of his father's asses which had become lost. A servant accompanied him, and when the two had searched diligently without results, Saul became discouraged and suggested that they return home. However, at this point in their wanderings the servant told his master of a man of God, a prophet, a seer, who no doubt could advise them as to their next steps. Saul evidently was willing to consider the plan recommended by his servant.

Send a comment to the editors
NEXT IN THIS ISSUE
Article
"Sing ... the songs of Zion" 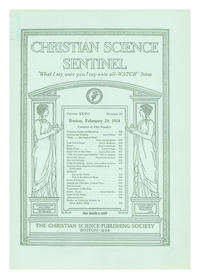