A news item from London appearing in your paper on...

J. Latimer Davis, Committee on Publication for the State of Iowa,—Dubuque

A news item from London appearing in your paper on January 22 referred to Christian Science as "fantastic," while in another part of the article that religion was conceded to be "the greatest means of faith healing." The well-intentioned thought in this latter comment is appreciated, but to avoid any misapprehension by your readers as to the teaching found in Mrs. Eddy's writings, I respectfully ask that space in your columns be granted for a brief statement concerning both references.

Solutions properly worked out by a student of arithmetic are never considered to be "fantastic," the result of fancy, imagination, or belief, but are accepted as evidence of correct arithmetical knowledge. In other words, they are acknowledged to be the result of the proper application of the rules of the science of numbers. For the same reason, but on a higher plane of thought, the demonstrations of Christian Science should be understood as the result of the correct understanding of the Science of Christianity, which is based on the understanding of the divine Principle, God, "with whom," as the Scriptures declare, "is no variableness, neither shadow of turning." Thus, the exactness of Christian Science clearly separates it from any association with mere belief, imagination, or the "fantastic," and proves it to be a positive religion both in faith and practice.

Send a comment to the editors
NEXT IN THIS ISSUE
Article
In reply to your correspondent, with reference to what... 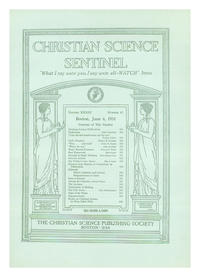