Several members of my family had become deeply interested...

Several members of my family had become deeply interested in Christian Science, but as a young man I did not feel that it held an appeal for me. At that time I was interested in politics and had convinced myself, by the reading of much distorted literature, that the times were "out of joint." I criticized and imputed wrong motives to the leading men in public life, and it seemed foolish to me for good church people to devote themselves to a study of unworldly matters as long as there were such pressing wrongs occurring in everyday public affairs. That I was not alone in this feeling was evidenced by the fact that this was a period of intense partisan activity. I must also admit that I was not well pleased with the other members of my family because of their lack of political interest and their attention to Scriptural readings.

Physically, I enjoyed health; and my eyesight was excellent until, without warning, in the midst of my college activities, I suddenly experienced a sharp pain through one eye, and upon examining it in a mirror I was surprised to find that the pupil was awry, so that I could not see. The agony was intense, and I had to close my eyelids to exclude the light. A friend assisted me to the office of an oculist, and during the following days I was given a series of careful tests, accompanied by sedatives and the use of dark lenses. The oculist, who was a friend of the family and recognized as a man skillful in his work, after tests extending over several days assured me that because of certain structural defects which had developed in my eyes I must now expect to wear glasses if I hoped to proceed with my college work. I was further informed that as the years passed the lenses of the glasses would have to be strenghened, and that periodical tests should be made to ascertain if further impairment of my vision occurred. Rather than receive Science help, I adjusted myself to the unpleasantness of glasses, and continued to read eagerly all the old rumors and condemnations directed against men in public affairs.

Send a comment to the editors
NEXT IN THIS ISSUE
Testimony of Healing
In April, 1919, I was confronted with a problem which... 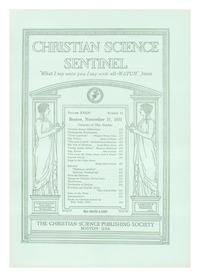