A Little volume of poems, translated from several foreign languages, which recently came into the hands of a student, bore the apt title "Strangers and Foreigners," taken from Paul's words in his great epistle written from the prison in Rome to the Ephesians, "Now therefore ye are no more strangers and foreigners, but fellowcitizens with the saints, and of the household of God." In the verses preceding, Paul tells the Ephesians what they were by nature and what they had become by grace. he tells them it was their faith in and their acceptance of the new and wonderful teaching brought to the world by Jesus the Christ that had enabled them to become "fellowcitizens with the saints."

Following this train of thought, the student realized what an essential part faith plays in all our human and spiritual relations. Humanly speaking, for example, faith in the superior knowledge of languages possessed by the translator of the poems made it possible for the student to accept the volume and derive pleasure and profit from its perusal. And, as a general rule, anyone faring forth to sojourn in a new country, a stranger and a foreigner, takes with him faith in large measure, faith in his ability to achieve success through his endeavors in new surroundings. 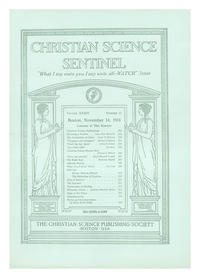