"A nail in a sure place"

Referring to the installation of Eliakim as treasurer to the court of King Hezekiah, the prophet Isaiah represents God as saying, "I will fasten him as a nail in a sure place." A nail is a very simple thing, yet the prophet used it to teach a great truth. Eliakim's predecessor was Shebna, who is supposed to have been a foreigner at the court of Hezekiah. We read that Hezekiah "did that which was right in the sight of the Lord;" and we know the valiant stand he made for the things of God. On two occasions, however, while he had the attractive but foreign element in his household, he temporarily lost sight of his high ideals.

Sennacherib, king of Assyria, after the conquest of Samaria, attacked Judah. Fear crept into the thought of Hezekiah, and he tried, with silver and even with gold from the temple of the Lord, to induce the enemy to leave him in peace. How often, when we are cherishing in our mental household some undesirable thought, foreign to good, we think to ward off evil's attacks by some concessions to its demands. But, as Hezekiah found, such methods are fruitless, for error still asserts itself and knocks at the gate of our thinking. When Hezekiah turned to God for help, and sent to the prophet for guidance, he experienced a wonderful deliverance. 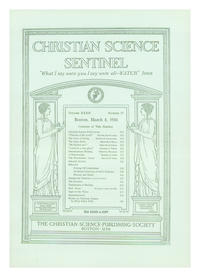