Reading and Hearing the Word

Ringing down through the centuries have come these words of Christ Jesus, more forcible to-day than ever, "Heaven and earth shall pass away, but my words shall not pass away." It is clear evidence of the power and immortality of the Word of God that in Bible times as well as in later ages there has always been an ever fresh and vital interest in the reading and the hearing of it. And as we look back over the history of religious teaching and practice, we find hope and assurance in the fact that the conquering power of Truth has been a mightily growing influence in human affairs, an influence before which all opposition and resistance must eventually yield. Always there have been those whose spiritual understanding was sufficiently clear to keep aglow this divine light.

Efforts to repress the reading of the Scriptures have been in vain, even when the reading of the Bible was beset with grave dangers, as in the Middle Ages when, in spite of threatened persecutions for heresy, groups of men and women gathered in secluded places to hear in secret the reading of Wyclif's English translation. Such persecution but quickened the moral courage which enabled those early Christian workers to defend their faith, and to make a path through the wilderness of ignorance that the way of others might be less difficult. And so enlightenment gradually dispelled the ignorance that held humanity in fetters, for it was the 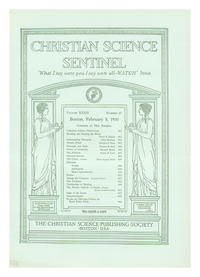