In a recent issue is a "letter to the editor," in which the...

Israel Pickens, Committee on Publication for the State of Alabama,—Montgomery

In a recent issue is a "letter to the editor," in which the writer comments upon the growing spirit of intolerance throughout the nation, and particularly refers to some efforts that have been made to restrict by legislation certain teachings in our schools. The writer, however, in presenting an illustration of such intolerance mentions that Christian Scientists in the state of California protested to the school authorities against one paragraph in a textbook of hygiene because it stated that "disease is real and that physical as well as mental measures should be taken for its cure." The facts are that the protest which was made by the California Christian Scientists to the paragraph in the school hygiene textbook was because the paragraph itself was intolerant towards Christian Science, and attempted to discreditits its teachings. In California there was also a textbook on hygiene by a doctor, entitled "Personal Hygiene Applied," in which book was a chapter devoted to a bitter denunciation of the religion of Christian Science. It is very natural that Christian Scientists also protested against the use of this book, especially considering the fact that its use in the public schools of California is a violation of the law which prohibits the teaching in the public schools of sectarianism or of any views intolerant towards religion. In both instances above referred to, the protests of the Christian Scientists were upheld.

As an evidence of the broad-mindedness of California's public school officials, permit me to quote as follows from the Manual of Health Supervision issued by the State Superintendent of Public Instruction: "The teacher should not encourage children to become morbid or introspective about their bodies. In all school health teaching emphasis should be put, not upon the pathological, but upon the constructive side. Right living should be the chief purpose of all such training." 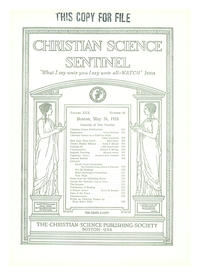