Psychology promotes the exercise of the human mind, or...

Fred Yould, Committee on Publication for the State of Georgia,

Psychology promotes the exercise of the human mind, or human will, in an endeavor to accomplish something that that mind desires, even though the purpose may sometimes be entirely selfish and ulterior. The practice of Christian Science, however, includes an understanding of the divine Mind, God; and the ministrations of this Science can be utilized only to promote the moral advancement and spiritual development of those who seek its healing and regenerating influence. Therefore, the fact that a doctor, in the "Health and Diet" column of your recent issue, catalogued Christian Science with psychology, mental science, and new-thought, evinced clearly his failure to have grasped the fundamentals of Christian Science, which is based on what Christ Jesus taught and practiced. Christian Science is not a form of mental or mortal mind gymnastics. The student of Christian Science succeeds in demonstrating the spiritual nature of this religion just in the proportion that he acquires a knowledge of, and then strives to reflect, the Mind that is God—the Mind "which was also in Christ Jesus."

Paul fearlessly uncovered the undersiable nature of the philosophy of "mind over matter," when he stated that "the carnal mind is enmity against God." Thus the beliefs in a so-called mind emanating from brain, and in souls and spirits confined within finite forms, run directly counter to the doctrine of Christian Science. Mind, Soul, Spirit, are names for Deity, and they refer to the nature of the one God. Thus Mind, Soul, Spirit, is not confined in man but is reflected by man, for the Bible teaches that "God created man in his own image, in the image of God created he him." Your correspondent recommends to your readers a study of the Bible and "Science and Health with Key to the Scriptures" by Mary Baker Eddy, in conjunction with books on psychology and mental magic. There is no more similarity between the spiritual teachings of the first two books here named and the material philosophies of the later named books than there is between Christ and Belial. Christian Science, the Science of Christianity, is overcoming the fallacy that intelligence and life are in matter, and mankind is accordingly entering an era of greater spiritualization of thought and action. In Science and Health (p. 466) Mrs. Eddy writes, "Science will declare God aright, and Christianity will demonstrate this declaration and its divine Principle, making mankind better physically, morally, and spiritually."

Send a comment to the editors
NEXT IN THIS ISSUE
Article
A correspondent in your recent issue wishes to know... 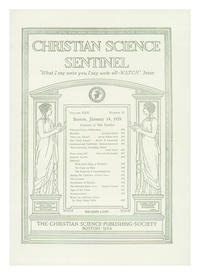