"Never too late to mend"

It is a homely old proverb, this one of "never too late to mend," but the world still needs its tone of encouragement. Men are still tormented with the sense of discouragement, sometimes almost of despair, which all too frequently settles down on them as the result of apparently futile effort, or seemingly frustrated ambition. Even the Christian Scientist finds himself again and again tempted to believe that his mistakes and failures, his sins of omission and commission, are so many that there is little if any use of his trying to bring any work to right fruition.

All this, however, is largely because mankind still believes that at least in the human realm evil is mightier than good; that evil can so magnify itself as to present a practically hopeless condition of thought to the one striving to conquer it; that it may even seem to convince such a one that he may as well lay down his weapons and admit defeat. Now to those men and women who have tried to vanquish evil while believing that it really exists, that it has presence, power, entity, that it has certain laws which make it well-nigh invulnerable, there is, comparatively speaking, so little assurance of victory over it that it is not strange that many a losing battle with it has been fought. 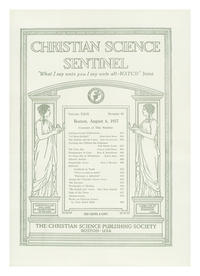