There are times when individuals, in striving for health and happiness, fail to reach their goal because they do not clearly understand the divine law they must apply to produce the healing effect. This difficulty may be overcome through remembrance of the fact that spiritualization of consciousness brings men into harmony with God, while the indulgence of evil thoughts, such as envy, criticism, hatred, lust, revenge, separates from God; for the carnal or mortal mind lives in its own darkness, and cannot mingle with the light.

In the Christian Science textbook, "Science and Health with Key to the Scriptures," Mrs. Eddy says (p. 102): "There is but one real attraction, that of Spirit. The pointing of the needle to the pole symbolizes this all-embracing power or the attraction of God, divine Mind." There are many instances in Bible history of the safety accorded those in times of danger whose holy, uplifted thoughts attracted them to God. In the story of Daniel we learn that his heart was filled with holy thoughts, and that he was therefore safe in the lions' den. His enemies could find no occasion against him, because "he was faithful, neither was there any error or fault found in him." They saw that they could find nothing against him "except we find it," as they said, "concerning the law of his God." Yet, try as they would, through artifice and subterfuge, to separate him from the divine Principle which he loved and served, "his windows" were "open in his chamber toward Jerusalem" and "he kneeled upon his knees three times a day, and prayed, and gave thanks before his God, as he did aforetime." And this close communion with God was the angel that later came and shut the lions' mouths; for no harm could come to purity and uprightness of heart. When Daniel was questioned by King Darius as to how it was that he had remained unharmed among the lions, he made the simple statement, "Innocency was found in me; and also before thee, O king, have I done no hurt." 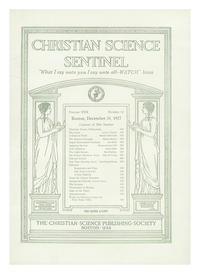