It is unfortunate that those who are not the followers of...

Philip King, Committee on Publication for the District of Columbia,—Washington

It is unfortunate that those who are not the followers of Christian Science so frequently make the mistake of trying to explain its teachings and of classifying it with other systems of healing having nothing in common with it. Couéism, which ascribes power to suggestion and is the operation of the human or carnal mind, is the antithesis of Christian Science, which attributes all power to God. Christian Scientists are able to control their thoughts by replacing the human or carnal mind, which Paul characterized as "enmity against God," with the divine Mind, or God. This is accomplished through an understanding of spiritual law based on the teachings of Christ Jesus, reduced to a demonstrable religion by Mary Baker Eddy.

Send a comment to the editors
NEXT IN THIS ISSUE
Article
In a sermon, which appeared in a recent issue of your... 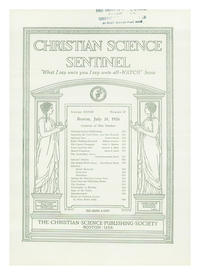