The revelations of Christian Science have so completely reversed many of the former false theories of mankind that often the thought of the student undergoes a quiet but radical transformation, without his immediate realization of the fact. Then sometime when his faith and knowledge of the laws of divine Principle are tried, he suddenly finds himself speaking with such authority to erroneous sense that spiritual healing is quick and sure. Not until this Peniel is reached does he perceive the steady upward trend of the road he has, step by step, so long and faithfully followed. And in the light of scientific demonstration he reviews with joy each apparently small but important step in the steady climb. Enriched with the assurance of righteous accomplishment, he again turns and continues on his journey, obedient in detail to the light of his guidance, strengthened in spirit to meet and master any new obstacles in the path. Some kind friend says, He has so much to meet! But the wise and trustworthy pilgrim replies, I have so much with which to meet it, so much understanding with which to conquer error.

What seasoned student of Christian Science has not reviewed with awe and gratitude his first successes in the demonstration of this Science? And if there should come a time in his heavenward journey when his courage is tempted to falter, his faith tempted to grope blindly, and self-pity claims to question an apparently protracted demonstration, these previews and reviews of the whole scene of his righteous activity may be found to hold for him fresh inspiration and profit. What has become of that early hunger for spiritual understanding, that eager search, in season and out, for the "pearl of great price" contained in the Bible and "Science and Health with Key to the Scriptures" by Mary Baker Eddy? Is his present daily study as joyous, as anticipatory of divine revelation? Or has he allowed it to become merely a perfunctory habit, a daily duty performed in the apathetic and half-superstitious thought of self-advancement? And, too, there was that seizure of the smallest opportunity to prove the practical availability of his new-found treasure. As he recalls, each trifling detail of the affairs of the day was made the object of earnest experimentation with the laws of spiritual healing as glimpsed through the daily study. Does he now meet irritation, delay, frustrated plans and small disorders with that same avid desire to prove his Principle? Or does attention to what he considers the more important problems at hand obscure his vision of the significance of the so-called little demonstrations? Blessed assurance, joyous anticipation, thoughtful testing, and abundant gratitude—these were the concomitants of that early experience which he may now resolve to employ in the solution of problems at hand. 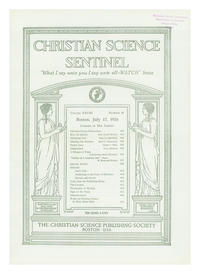