Words cannot express the gratitude I have for Christian Science

Just prior to this I had very reluctantly begun reading the textbook of Christian Science, "Science and Health with Key to the Scriptures" by Mary Baker Eddy. My wife had informed me that a kind neighbor had left the book and had desired me to read it. I began reading in the evenings after the day's work. Each evening I would read a little more. About ten days later, while doing certain work in my employment, I noticed after the completion of the day's work that I had not used any profane language. This was indeed very unusual for me. I then discovered that the desire for liquor, tobacco, and profanity had left me without the slightest use of will power; and they have never returned. For thirty years I had been a constant user of tobacco; and for twenty-five years I had used liquor. I had tried many times during those years to break these habits through will power, but the seemingly strong desire would keep me in misery until I went back to them again.

Send a comment to the editors
NEXT IN THIS ISSUE
Testimony of Healing
In 1923 a kind friend brought Christian Science to my... 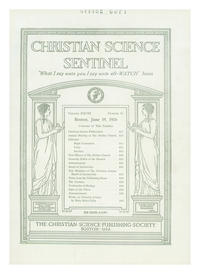