In a recent issue of your paper a critic, though writing...

David A. Giel, Acting Committee on Publication for Holland,—Arnhem (translation)

In a recent issue of your paper a critic, though writing in a very appreciative way about Christian Science and its daily paper, The Christian Science Monitor, incidentally calls it profane that in The Mother Church in Boston, on one side of the great organ stands engraved a quotation from the New Testament, bearing Christ Jesus' name, and on the other side by way of a "pendant" a quotation by Mary Baker Eddy, thus putting the latter on a level with Jesus. That Mrs. Eddy did not regard herself as equal to Jesus, not only becomes evident from the spirit of her teachings and from her statements about Jesus, but also from her unequivocal exhortation, "Follow your Leader only so far as she follows Christ" (Message to The Mother Church for 1901, p. 34). As the charge of being profane is a very serious one, we ask your permission for a few remarks in justification of the fact that in the Christian Science church a quotation from Mrs. Eddy has been put as a "pendant" to a statement of Jesus. In the sixteenth chapter of John we read that Jesus shortly before the crucifixion declared to his disciples: "I have yet many things to say unto you, but ye cannot bear them now," and promised that the Father should send them another Comforter, "the Spirit of truth," which should guide them "into all truth." This clearly conveys the promise of a later divine revelation, for the completion or elucidation of what Jesus either could not reveal as yet, or could only reveal in veiled language. Mrs. Eddy is the chosen one through whom this revelation—in a form adapted to the thought of this age—has come to us.

Now, whereby, according to Jesus, can true prophets be known? The answer in Matthew is, "By their fruits ye shall know them;" and in many other places mention is made of works. In John 14:12 we read: "He that believeth on me, the works that I do shall he do also; and greater works than these shall he do; because I go unto my Father." In Mark 16 and in other places, the healing of the sick is specially mentioned as being part of these works. Since about the fourth century A. D. the church has been teaching that these texts do not apply to the present time, and so it has declared itself unable to produce the works. Consequently, it has lacked the proof whereby to test the purity of its teaching. Mrs. Eddy, however, accepted Jesus' demands in their entirety. She declared that a spiritual interpretation of Jesus' words, as given in Christian Science, indeed makes free, and taught us to pray the prayer that is answered. Her church is based on demonstration. If this were lacking, the whole structure would crumble and its adherents be reduced to shamefaced silence. Instead of this we see it extending throughout the world, in a way unheard of before, and with ever increasing rapidity, while the works of healing and liberation are ever and ever assuming a higher aspect. Mrs. Eddy's supreme fruit certainly is her textbook, "Science and Health with Key to the Scriptures," through which humanity need no longer be dependent on a human person or persons, but every one may have the Comforter abiding forever with him, leading him into all truth. What more could one ask? Mrs. Eddy has fulfilled all of Jesus' demands, and therefore her teachings can be regarded as a divine revelation. Hence her statements are allowed to be put beside those of Christ Jesus, as emanating from the one God; but they are tributary to those of Jesus, because they constitute an elaboration of his teaching.

Send a comment to the editors
NEXT IN THIS ISSUE
Article
The excerpts from the sermon of a clergyman, published... 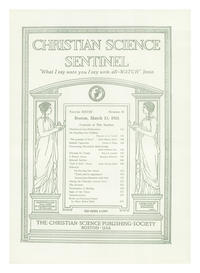