It is over sixteen years since I attended my first Christian Science...

It is over sixteen years since I attended my first Christian Science Wednesday evening testimony meeting. At that time I was a nurse, living in a Nurses' Home and Registry, doing medical nursing. A young woman who was living in the same city asked me to attend the Christian Science meeting with her. Two Christian Science practitioners were coming to the house where she lived, and they had spoken of the Wednesday evening meetings. When I told the people at the Nurses' Registry that I intended going to a Christian Science church, the remark was, "Well, I would n't go there if I were you;" the the remark carried no weight, as I went to the meeting just the same. We were late, and on entering the room (the meeting was held in a house), I found it well filled, which surprised me very much, as I did not know there were so many Christian Scientists in that vicinity. The Reader was reading from the desk something that did not interest me very much. When the testimonies were given, a woman gave a testimony of the way typhoid fever was quickly healed during an epidemic. I had heard of the epidemic, but had never before heard of typhoid fever being cared for by anything but materia medica. After the meeting was over my companion and I went home. Nothing was said on the car about the meeting, but after we started to walk to the house she said to me, "Well, what did you think of the meeting?" "Oh," I said, "it was all right." 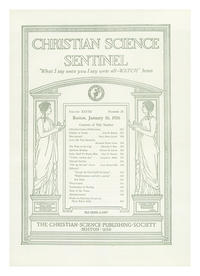