The Correct View of Self

The student of Christian Science who seeks a concise statement of the method by which sickness is healed finds it in Mrs. Eddy's words on pages 476 and 477 of "Science and Health with Key to the Scriptures": "Jesus beheld in Science the perfect man, who appeared to him where sinning mortal man appears to mortals. In this perfect man the Saviour saw God's own likeness, and this correct view of man healed the sick." Seeking a rule for the healing of the sinner, the student is satisfied by a correlated sentence on page 210: "Jesus healed sickness and sin by one and the same metaphysical process."

From these statements the student learns that the correct view of man, as the likeness of God, is the prime essential for metaphysical healing. Peace descends upon his thought as he begins to turn from the contemplation of a supposititious world of matter and mortals to dwell mentally in a universe peopled by God's ideas. Time which would once have been wasted in the bitterness of resentment or the anguish of regret is now devoted to obtaining a clearer view of God and man. Charity and forgiveness become spontaneous, sorrow is seen to be a myth, as this correction of thought is persisted in, and material sense yields to the activity of spiritual sense. 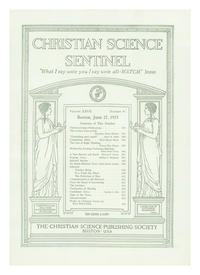