One of the most beautiful of the parables, those simple yet forceful word pictures with which Christ Jesus illustrated the truths he taught, is that of the good Samaritan. Its direct, tender appeal was brought forth in response to the question of the lawyer who, "willing to justify himself," demanded, "Who is my neighbour?" In the silence of a listening crowd one can almost hear the mental conflict as error, stirred and enraged, sought to entangle the calm yet unfaltering Jesus, whose understanding of the ever-presence of God's kingdom protected not only himself, but all those seekers of the light who eagerly awaited the reply of him who spake as "never man spake."

It was typical of his courage and insight that the Master, surrounded by Pharisaical intolerance and faced with the blind opposition of ignorance and fear, rebuked the pride of his listeners by choosing one of a despised race, a Samaritan, as an example of brotherly love, as a type of compassionate thought, expressed in a tender, practical, healing message to mankind. The good Samaritan,—such simplicity! We are told in John's gospel that the Jews had no dealings with the Samaritans. Yet the Samaritans expressed many good qualities, as witness the woman of Samaria to whom the Christ was revealed at Jacob's well; and, also, in the case of the ten lepers who were healed, the one who returned to give thanks was a Samaritan. 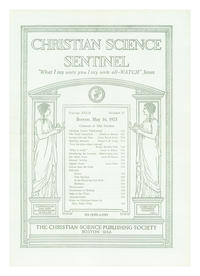