In the words, "God is light, and in him is no darkness at all," John attempted to put the gist of the Christian gospel. Whether he succeeded or not, he did express in a few words a fact that is of supreme importance for all men. Doubtless, John used "light" and "darkness" as Jesus used "good" and "evil" or "Spirit" and "flesh." Probably, also, John chose the words he used in order to present, in the strongest way he could, the idea that God is absolute. Light and darkness seem to mingle, and to produce a condition or state that is neither pure light nor the opposite. In effect, therefore, John said there is nothing in the divine nature like a mingling of opposite elements. So in his brief summary, whether he so intended or not, John stated in a positive way the fact that God is absolute. And when this fact is considered in relation to human welfare, it can be seen to be of supreme importance to everybody; for all that is wrong with anybody is his seeming to be a compound of opposite qualities. 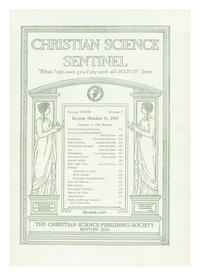