Sticking to the Pattern

A Child, taught to sew by piecing quilts, after becoming somewhat proficient was allowed to cut the blocks that were to be thus put together. She was told by her mother to use the pattern always, and not to cut one block from another. There was a great temptation to disobey this admonition; and one day her mother allowed her to go on for some time cutting one block from another. When many had been thus cut, the child was surprised to find that the last one varied perceptibly from the pattern; and the lesson was one that could be profitably applied many times thereafter.

Is there a temptation to apply to our problems the deductions of another, rather than the absolute truth? Does it seem to be narrow to feel we must stick closely to divine Principle and follow the way our dear Leader, Mrs. Eddy, has outlined in "Science and Health with Key to the Scriptures" and the Manual? If we should find ourselves tempted to go around from one to another, thinking to gather something easily understood or previously digested, let us remember that the pattern remains absolutely correct, but that the deductions of others, though they vary but a hair's breadth, may be the beginning of our swerving from the true pattern,—from divine Principle. It is our privilege to give out that which has become ours through demonstration, and thus help to feed the hungry; but we must remember that we can help others to have the same blessings only as we point them to the source of our help. 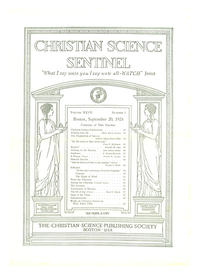